Yu-Gi-Oh: Loss of the Pharoahs
Welcome to YGO RPG! I am your Head Administrator, Gaia, and I'd like to welcome you to our Role Play community. If you are a guest, then look around the forum for anything that may fit your fancy; and join us, if you like! If you are already a member, then log in; don't miss out on the fun!

Who is online?
In total there are 2 users online :: 0 Registered, 0 Hidden and 2 Guests

Human
Name: Yuri
Gender:Male
Age: 25
Appearance: Long Coal Black Hair going down to just above the small of his back, Blood Red Eyes, pale skin, Burn wounds covering his face, tall but muscular, Cold to others at first but highly protective, sometimes seems distant as if daydreaming.
Deck Type: Chaos Dragons with a couple E-Drags
Duel Gazer:basic
Duel Runner:none
Duel Disk:basic
Bio:An outcast from Russia (or some equivalent to Russia for this RP) who watched the slaying of his parents when he was only 10 yrs old, then living on the streets with his 15 yr old brother often fighting to stay alive. His Brother, A Dragon Rulers user, would duel in small tournaments for the little money he could win and kept them alive. His brother taught him how to duel, as a way to pass the time as well as a way to make extra money at tournaments. Tragedy struck again when a group of rival duelists, angry after losing a Tag-Duel tournament that he and his brother had won, burned the shack they lived in down killing his brother and leaving him scarred badly. The day he got out of intensive care he returned to the charred rins of his home and found what was left of his brother's cards, 2 Dragon Rulers. He also found a Safe his brother had kept hidden from him with money intended to flee the poverty they struggled in. He did so, adding the cards to his deck and modifying it to use them.
Strengths
- smart
- Physically Adept
Weaknesses
- Ignorant to some feelings

Weakness
-Unable to speak as he is a Dragon

https://yu-gi-oh-rp.forumotion.com/t4-character-approval-template please use this template u have given yourself a disc/runner/gazer that was not approved and each one of your strengths need a counter weakness.

Ok Luc is right about the template and all. There is one more thing though, the strengths and weaknesses have to balence out. Also there has to be more things that you could consider a strength about yourself, right?
_________________
Human
Name:Alex Reiaki
Deck Name/Type:Twighlightsworns 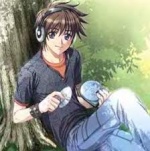